Summary of Works: In June 2019 Crown Plus (Crown Plus) were commissioned by M40 UK Highways (UKH) to undertake an as-built survey of an existing Aco-drain which was located between the slip road and lane 1 of the M40 northbound at junction 15.

Whilst in discussions with UKH regarding the commission Crown Plus Contracts Director undertook a preliminary risk assessment to inform the pricing of the project and its scope.

At this stage a desktop study was conducted together with a drive-through survey at traffic speed which identified that multiple gratings had collapsed and were in need of replacement, and that the Junction 15 northbound exit slip would require a full closure along with a lane 1 & 2 closure on the northbound carriageway.

Crown Plus undertook the drainage technical surveys over a one-night period acting as principal contractor under the CDM regulations, including provision of a Welfare Van and appointment of traffic management subcontractor.

Following the survey an as-built drawing in AutoCAD was produced for UK Highways which identified 120m of drain requiring replacement. In collaboration with UKH the commission was extended with Crown Plus appointed principal contractor for the necessary drain replacement works. 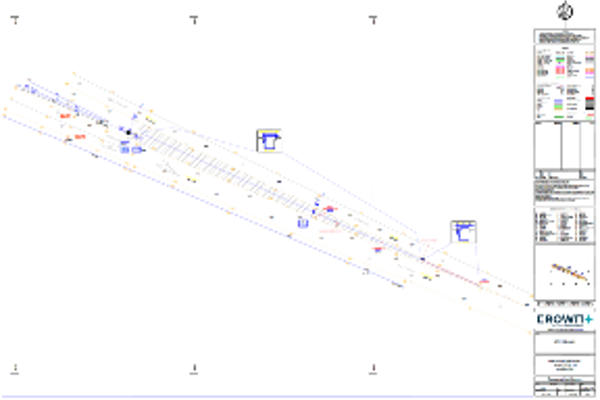